Holiday Ramble and update of December

December 26, 2011
Merry Christmas And a Happy New Year Everyone

So first I want to say the all important Merry Christmas to everyone I hope your holidays are and were special like you are to me. I also hope they were a restful time with lots of great food and fun.
Lots in this post so grab a cup of cocoa or coffee!

Here is a sample of the card I sent out to the people on my business portion of my Christmas card list. 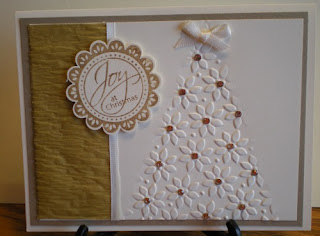 It is one we did back in our Christmas card class with a few change ups. I added on some champagne gems instead of the shimmer paint and I put a bow at the top of the tree. It really turned out to be a favorite of mine. After making 50 of these I read somewhere that you shouldn't send out Christmas themed cards to clients it should be holiday themed. Oh well I will change that next year. That same site also said not to send out hand made items unless they were quality work. Hope my stuff is up to their standards.

Here is the card I sent to friends and family: 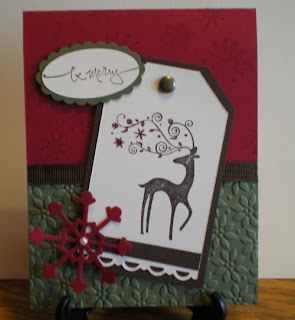 If you did not get one please note that I probably do not have your address. That was my biggest issue this year. Email me your address so I can make sure you get a Christmas card next year.  Also I felt I weird sending the same cards we made to my card class girls so I opted to just deal with this issue next year. I know a cop out but I will plan better next year.

I did finish a bunch off my to do lists this year as well as start Tax work early so that was a huge bonus. Very proud of myself for all that I am accomplishing.

Irene's grandchildren book was completed and of course in the excitement I forgot to take pictures. I have been working on this book for almost a year now. It started with me making all the girls princesses except 1 as she is older then the other girls and then the boys were all individual monkey themed sports according to what they liked to play. Well that got to be a bit overwhelming with work and Miranda's surgeries, LIFE!  So I finally was able to get real and sit down with the book again and make it fun. The book ended up being completely done over with 8 princesses monkeys and 15 knight monkeys for all of her grandchildren. Plus some amazing poems I had found online that fit Irene and Larry to a "T". I wish I had remembered to take pictures, but take my word it is adorable with the princess and knight costumes from the Once Upon a Time set from Scrap Chick merged with the Monkey sets (girl and boy heads and arms) It was perfect. I think I like the monkeys better then the bears that come with the actual set.

I also completed an amazing OZ book for Lizzie's Mother in Law I will post that in a separate blog post so I can put up all the pictures without making this too long as I plan to add the bag book pictures later in this post and they are shorter then the Oz book. Got the idea off of n Ebay seller then saw the book at Archivers. It was an interesting book with little and big pages which I altered it to be a larger flat book. It just had too much wasted space for my taste.

I Completed the 8 Calendars and before December 11th! (separate post of those pictures too) Considering I Started them back in June which was just buying some of the paper and stopped all together until about Thanksgiving I'd say that is a huge accomplishment.  My personal goal of December 11th for mailing the Oregon Gifts was met and it was Delivered on the 15th safely. Which was even a bigger relief. Then I was able to focus on my Christmas cards for personal and work People.  Yep I still had 80% of my cards left to complete as of December 11th. I wasn't trying to wait that long but life has a way of pushing off things as we all know. So I put the Box of card parts next to the couch for evening processing while I had family TV time. Figured that was how I was going to have family time and card time this year. It worked and I was able to assemble them rather quickly too. Got those out last week with a huge sigh of relief.

2012 goal is to make sure I have the calendars and the cards done early so I am not feeling the pressure of December again. Especially since we will have a little one running around next year.
Lizzie is now in her 2nd trimester!! Due date is June 26th

Got to make some amazing ornaments with the High School kids and my Craft Class at the Rec Center. Those kids really teach you what is important in life.

Completed my last gift for my Secret Stamper: made another bag book; this time I used the Gingers from the Scrap Chick line (I know you all are probably wondering if I own stock!) I do have a ton of her patterns they are all so cute. I didn't end up using the baking theme that comes with the set (http://myscrapchick.com/cheryl_seslar.htm#cs-gingers). I used the folk hearts and stars dies I have with the starburst texture from SU for some oomph instead. Its a book I've been wanting to make for a while just have not had the time.  So now I just need to send it to her as her final gift of the 6 month series.
Gingers Bag Book for My Secret Stamper

Christmas came yesterday and we were of course not spending money this year on each other just the kids.
HaHaHa! My wonderful husband decided to get me a new computer. He was tired of my laptop overheating and shutting off so he and Derek went last weekend and bought me a computer. I had no idea and I was good and didn't peak. (I wanted to but I wanted to be surprised more). So yesterday after Derek and Liz left to spend the day with more family we went up to the office and we started the process of backing up my laptop and moving files to the new computer. A long process but luckily I have had my external hard drive for a while and have been diligent about keeping my important stuff up there. So the process wasn't as long as it could have been. I recommend having a hard drive and keeping your files backed up it really saves time. Plus you never know when your computer might crash.

Lucked out and was able to get My Digital Studio across without the disk since I couldn't find it. Went online and downloaded the Silhouette program but couldn't transfer my files from my laptop - Which turned out to be a blessing.  I had to do a full reload on that one which was interesting as I ended up with 472 more files then before.  I guess I should have done that a long time ago and that the original merge I did wasn't as successful as I thought it was when I changed to the new program 2 years ago or so.... Oh well its fixed now. Jason was looking at my file number and rolling his eyes. I have 11,890 Silhouette files. Now before you go thinking I am crazy, OK I know its extreme I was a member of an unlimited group for $14.99 per month for a full year back in 2009 I think it was. So I would download all the files I could per month and I have a ton of junk and I will NEVER use all those files. a lot of them are weird and ugly junk that I would never have downloaded had I had to pay the $.99 per file they charge but for unlimited I was going to get every file that had out there. You can't tell me you wouldn't do the same. And since being off the program I have bought maybe $10 in files in 2+ years from them. Scrap Chick on the other hand is another story!!! (We wont be totaling those files anytime soon Jason might have a heart attack) but in my defense she has 60% off sales all the time which is when I buy and I have been good and I have restrained the past few months, just done her weekly freebies until last week when she did a 50% off holiday sale then if you spent $25 you got an additional 50% off so for 75% off I got a nice little bunch for $26. Who can resist her cute files for that price right?!?!?!? Plus I actually use her files so I get my moneys worth:). Did you not see those cute Gingers up on that bag book above... That set was originally $19.99 I got it for $5. SCORE!

Bad news is my CreatAcard is no longer with us, it isn't compatible with the new computer so I had to find a new program. It has been a great program for me for calendars for Miranda to use for School and business cards and just random things I need here and there. I will miss that program dearly. Hopefully Hallmarks 2012 card program will do the same type of things and I wont be sad for long. Its funny though I never use it for cards. Thank you Jason for ordering the new one so quickly so I don't have to go without for too long.

Well I am sure your needing a potty break by now so I will run I have a few more blog entries to do too so check back later today I am doing a marathon entry day!
Love you guys
Dianne